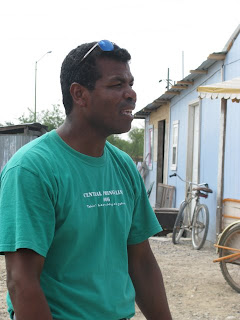 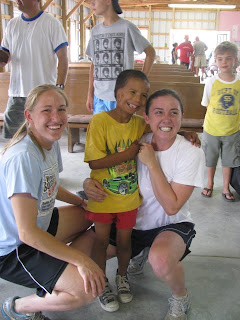 Emily and Bri and a new friend

On Saturday some new friends arrived at the CHI Headquarters from UNC Chapel Hill. We knew that being Tarheels they HAD to be good people. But we didn't know what a blessing God had in store for us. Emily, Bri, and Emily's Mom, Jill came hauling a UHaul trailer full of athletic shoes which Emily and Bri have been collecting over the course of several months. Their project was called Kicks for Community and they have gathered over 1,000 pairs of shoes for the needy. Among several other places, the Lord led them to CHI to distribute some of the shoes. Yesterday we went unannounced into one of the poorest communities in Reynosa with the hopes of offering some of the shoes. Brother Hector is a missionary/pastor who has been led to develop this community known as a "colonia" to help these people in the name of Christ. The community is located on the Rio Grande River which marks the border with the U.S. Many of the people here are refugees from other Central and South American countries who have tried to get into the U.S. and have been deported. They come hungry, dirty, and hopeless. Brother Hector tries to meet their physical needs as he ministers to their spiritual needs.

When we arrived they were having Bible study in the "chapel". CHI Director, Betsy, went in and asked Brother Hector if it would be possible to distribute shoes and he said most definitely. As I said, this was an unplanned trip. However , after he introduced us to the group of about 50 he testified that just an hour earlier a man had arrived with shoes that were full of holes and far past their prime. Brother Hector requested that he be given some shoes and was told there were none. They prayed that the Lord would meet this man's need. A little more than an hour later we arrived. Isn't God AMAZING!! It was such a blessing to see God use His people in such a tangible way. Because Bri and Emily were willing to do what God laid on their hearts back in Chapel Hill the needs of souls in Reynosa were met. And not only were the people of the Colonia blessed, but ALL of us were blessed.

Brother Hector then took us around the community and showed us how it basically runs, what they have done already and what they are planning to do to improve the quality of life for these people as they minister to them spiritually. I believe if you looked up "Faith Based Ministry" in the dictionary you would see a picture of Brother Hector and the Colonias. He said that from one day to the next they do not know where the food they eat will come from, but they have never gone without a meal. God is all sufficient!!

I am humbled. Mom

Hey there Boyles family! This is Chrissie from little ol Vale, NC!

Sorry I have not sent you anything on here....to be honest I forgot about this site...not you guys just the site! Anyway, Ann Marie your mom sent me the link. So a thank you goes to her! You sound so upbeat! I praise the Lord for that! Please know I pray for you everyday. The shoe story was so sweet and YES "how great is our GOD" to plan such a thing....talk about perfect timing! I can not wait to see the updated website for the children's haven! It needs HELP! Your creative touch will be wonderful and the "welcome room" WOW can not wait to see pictures of that also! Love you guys!

Hey guys,
Your updates mean so much to me. I check the blog weekly and update our youth group on Wennesday nights. We pray for you all and hope to make contact from time to time.

Thanks for all you do,
Jim C.

David will be in McAllen on June 10. Let us know if you need anything. You can email me back at amyturner4@msn.com.

Boyles - It is good to see you are making out ok. Keep up the good work you are doing.

Brad - miss those lunches...met with Warren the other day. We both say "hi".